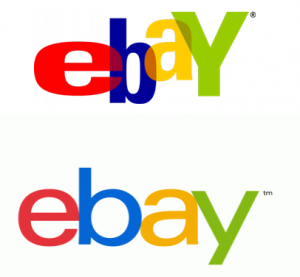 I am going to have to weigh in on this one. Though the re-design is alright, the change is not a good one in my opinion. Ebay has lost almost all connotation and branding with the new contemporary and boring font.  I mean, an overhaul is fine, but why did they go with such a common font?  At least they didn’t change the colors.  I understand the argument that came from the top was one of a new, successful, and global feel. In their minds they’ve out-grown the whimsical adolescent start-up look, and now they want to graduate. However, one can argue conversely that a broad and matured online demographic may no longer view them as a value-driven marketplace, but instead another big business cog in corporate America.  And really, was the old logo holding back any business? and if so what demographic represents that? I would have like to have been at that board meeting, because i think the change was tailored to investors for grooming purposes.  Grooming for big business.

The new logo is fine by design, but I were given the choice of the two, I would have picked the old one on artistic merit.  I would have just redesigned the header and website.  I will continue to use Ebay, so does that mean that I just negated my own argument; )

Sorry, the comment form is closed at this time.